Want to know how to get the body of a fighter?  Todays blog comes from guest writer Jamie Stewart at www.warriorpunch.com

Fighter’s bodies make the average guy (or gal) on the street extremely envious. I mean, these guys walk around cut up while packing serious muscle. A fighter’s body is the epitome of fitness and good health; strength, speed, flexibility, functionality – it’s all in balance.

Getting a body that is muscular and combat ready requires hard work, but it isn’t out of reach for the average Joe. Even if you never have any intention of stepping into the ring, it’s still possible to have a physique comparable to these modern day gladiators.
And you don’t need any specialist training or fancy equipment; you can get ripped by doing simple bodyweight exercises. Stick to the basics, and do the basics well.. just like boxing.
The following seven exercises are the bread-and-butter of any fighter’s routine. They’re not glamorous – and you’ve probably done them a thousand times before – but they are highly effective. If they’re not already part of your routine, you know what you’ve got to do.
The Dreaded Burpee
Everyone’s favourite… not! Although you may cringe whenever your coach shouts the dreaded B word, there is no better body weight exercise for building stamina and burning calories.
You should be grateful for the punishment (honestly), as this whole-body movement works several major muscle groups while building the cardiovascular endurance required to go the distance in the ring.
Squats for Punching Power
With boxing being all about an exchange of fists, the legs are often neglected and replaced with upper body strength development. Leg training is often substituted for press ups, sit ups, or training that has a more direct payoff for the fight game, such as smashing pads and bagwork.
However, strength conditioning for the legs will provide that strong and stable base required to absorb punch impact while also loading power into your punches. Yes, power is generated through the torque in your shoulders and hips, but it also comes from pushing off the ground. Uppercuts would be nothing more than a slap without the upward thrust generated by the legs.
Add squats to your routine, and you’ll notice the difference in your balance and power.
Get Explosive with your Push Ups
Push ups work way more than just your arms as they also engage your chest, back, shoulders, and core. They’re part of every boxing coach’s arsenal and rightly so. They help to build upper body strength and that all important arm endurance required for the sport.
But if you want maximum impact from push ups, try clapping push ups. This plyometric exercise mimics the explosiveness of punching instead of the longer time under tension associated with weight training. The result? Snappy, knockout punches! 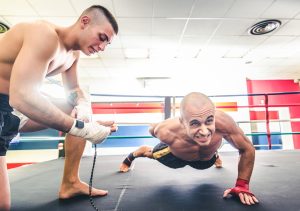 Build Highly-functional Upper Body Muscle with Pull Ups
Pull ups suck at first, but it’s worth persevering as this compound exercise utilises nearly every muscle above the waist.
Using your body weight as resistance is highly effective for building lean, functional muscle. Meatheads that are all about loading up the barbell on the bench press may have an inflated chest and be gym strong, but it comes at a price; mobility. As a boxer, you want to pack power behind your shots but remain supple; which is where pull ups come into play.
Sit Ups – My Arch Nemesis
If there’s one exercise I hate, its sit-ups. There’s no pain like the crippling pain you get from crunches. Yet, as much as hate sit ups, I regularly do them.
A strong core is vital for boxing. The muscles in your stomach and back are responsible for generating a lot of the force behind a punch, and mid-section muscles are also necessary for absorbing body shots.
Make sure you do every variation of sit ups you can think of to target the upper, mid and lower stomach muscles as well as the obliques.
Improve Footwork with Jump Rope
There’s nothing like jumping rope for building endurance, cardio, cutting weight and improving coordination. Jumping rope builds the fast twitch muscle fibres in the calves which leads to an increase in responsiveness and faster footwork.
Varying the intensity of jump rope also means you can use it as a warm up and cool down, or a frantic, calorie-burner between rounds.
Are You Doing Your Roadwork?
While it takes you away from fight training, road work (or running) is still one of boxing’s most essential training tools. Roadwork is imperative for fight conditioning. Fail to put in the miles, and you’ll be gassed in round two on fight night.
To get the most out of your roadwork, you need to vary your intensity and duration. That means doing those slow and steady five mile jogs in the morning as well as hill sprints. Including both aerobic and anaerobic training will prepare you for the rigorous energy demands of a fight.
Wrapping It Up
Contrary to what you or anyone else thinks, it is possible to have a boxer’s physique without having it out in the ring. Building lean, functional muscle is as simple as performing these movements properly, frequently, with high intensity, and of course, while sticking to a healthy diet.
If you want to get the most out of these exercises, my advice would be to combine them all in a circuit. High Intensity Interval Training (HIIT) is the fastest way to carve out the body of a fighter.
Author Bio
Jamie Stewart is a muay thai fighter and boxing enthusiast with a passion for martial arts and fitness. When he’s not training, he likes to write about martial arts, health and fitness, nutrition, and mindset.  If you would like to learn more, you can find him blogging at www.warriorpunch.com.