Getting started with boxing 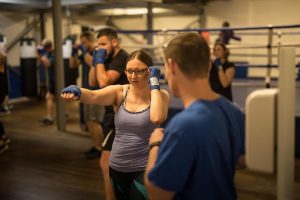 There is always a daunting feeling in the pit of your stomach every time you think about starting something new.

These are some of the questions that we berate ourselves with.

The truth is, must of your fears are probably unfounded, but that doesn’t stop them creeping in and sometimes stopping you from starting at all.

Here are a few worries people generally have about learning to box:

Sparring isn’t everyone’s cup of tea and that is perfectly normal. There are classes catered to those who wish to learn the art, or just get a good work out in, without the pressure of having to spar.

This couldn’t be further from the truth. Boxing clubs are in fact very family orientated with members often feeling like they belong. Some of the best of friendships are formed in a boxing club.

One of the things we are renowned for at 12 Rounds Boxing is our signature boxing fundamentals course for beginners.  Some gyms do throw beginners in with experienced fighters.    We don’t believe this provides a good experience for anyone.  A much better way is to offer a programme which teaches the basics of boxing BEFORE you progress and where everyone is at a similar starting point.  Our boxing fundamentals programme does just that.  Over 4 weeks you’ll learn stance, guard, movement and how to put basic punch combinations together.  It will also super charge your fitness. Each session involves body weight circuit training combined with boxing drills as well as learning technique.  There is nothing quite like boxing training to take your fitness to a whole new level.  Again, we don’t believe in throwing you in the deep end.  Over the 4 weeks our coaches will build on your fitness week by week.  We even fitness test you at the beginning and the end of the course so you can see the improvement.

If you like the sound of that and are ready to get started, our Boxing Fundamentals course runs monthly.  Don’t just take our word for it though.  We offer a free taster session for anyone new to the club.

Book yourself on here and come along and quash those fears.

Scott has been boxing since he was 18 and has an impressive amateur record of over 50 fights. His talent was spotted early. When he first walked into Islington Boxing Club he was put straight into the competitive class and had his first fight 3 months later. Scott has fought all over the country and travelled to extensively including to South Africa where he won boxer of the tournament. Now retired from competing Scott is excited to put his skills and energy into coaching